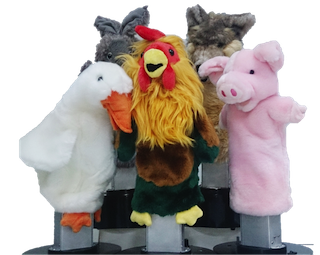 Robots have been shown to assist in education and development of social skills in children. However, there has been no study yet that benchmarks the effectiveness of robots with respect to traditional playtools found inside a classroom, such as pretend play items and blocks.

The purpose of this project is to develop robotized puppets to support teaching and activities in kindergarten and evaluate their effects.  The robot puppets are used by teachers and children for pretend play, which contributes to the development of children’s find-motor skills, communication and creativity. The puppets, which are battery-powered are operated by users via remote control to participate in plays and conversation among the children.

Different types of robotic puppet design were considered before settling on a glove-type puppet. To benchmark the robot performance, a total of 52 five year-old children were observed, from which quantitative and qualitative data were collected. The result of the study indicates that when playing with the robotic puppets, the performance of the children with respect to thinking and learning, creativity and imagination, and social interaction and independence, is comparable to other traditional playtools.

LPH Toh, A Causo, PW Tzuo, IM Chen, SH Yeo, “A Review on the Use of Robots in Education and Young Children,” Educational Technology & Society,  [accepted for publication]